"I ASPIRE TO SELL IN JAPAN" 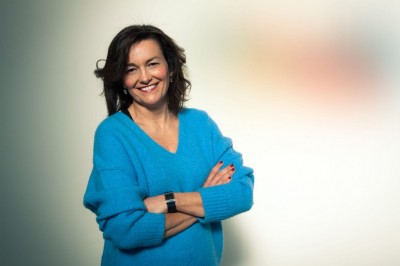 She is pretty and jovial, maintains a slim body and could act as a feminine claim for the products that she creates herself with her pharmaceutical training and markets through her «micro-SME2.

He belongs to a restless family, with a compound and sonorous surname, who arrived in Vitoria 41 years ago due to the transfer of Cegasa, where his father worked, from Oñate to Vitoria. His sister Esther works as manager at Gasteiz On, the association that fights to maintain the virtues of urban commerce. And María, tenacious since her time as an exemplary student, managed in 2002 to be distinguished by Ampea with the title of revelation businesswoman from Álava.

It all sounds like a model-daughter. «The truth is that I have given little war. I had a very good career because I have always been a hard worker, a little ant. I think that great things are not achieved from today to tomorrow. With this ideology he educates his two children "in effort, something that does not exist today because we are experiencing a crisis of values." The success that she has achieved with her high-end cosmetic firm María D'Uol is due "to perseverance, patience and humility." And to lead by example, she has attended a mothers' school for eight years. She studied Pharmacy because she liked teaching and aspired in her youthful dreams "to be a professor." But since life is a channel that hides meanders, he allowed himself to be led by the current. With the title hanging on the wall, she traveled to Barcelona to specialize in dermatology and cosmetics. He joined a company and did not fool anyone, he already warned from the first day that he wanted to set up on his own. He offered his talents to the house that paid him and became familiar with suppliers and raw materials. Own products A goal was already nesting in his mind. «I was very clear that I wanted to set up my own company in Vitoria. I am very proud of two things: being a pharmacist and living here. I do not regret anything". There are those who in the beginning may have called her a visionary. She, on the other hand, trusted, fully. "I knew my idea was good, so I had to go ahead and succeed." It refers, of course, to the María D'Uol cosmetics (it comes from Unceta Olazar) that it markets through aesthetic centers, spas and wineries in Euskadi, Cantabria, La Rioja, Madrid and Castilla-La Mancha. "I aspire to sell in Japan, I am convinced that in the end I will end up exporting", she affirms with a certainty that cancels any reply from the interlocutor. He says it now, seventeen years after opening a headquarters that is the consequence of a determination. «I knew that my product was fantastic and that a high-end cosmetic line at affordable prices was lacking. It had to work because I think I have a sixth sense to formulate, I handle top quality raw materials and I know the proportions of the active ingredients ». Currently her firm employs eight employees, but Maria remembers "very hard times" that she could only overcome with "the fundamental support of the family." «In 1992 I got the first truck with fourteen pallets. 'Where is the porter to unload?' The carrier asked me. 'You have the girl in front of you', I replied ». Or that summer of 2000, when she distributed suntan lotion around the stores two days before giving birth to her firstborn. Today is the day that sells make-up removers, anti-wrinkle creams and cellulite fighters "with the illusion of the first day." More, really, because now she confesses enthusiastically about a project in which she has put "her soul", that of applying the properties of grapes to cosmetics. It has launched the 'Gran Reserva' line of youth in elegant wine-colored containers. "I told myself that with the Rioja Alavesa next to it, a good line of wine therapy had to be created by María D'Uol", indicates this pharmacist who is delighted to be one, this businesswoman who resists well the onslaught of the crisis with "romantic projects". Full story in El Correo Digital