"Grapes for beauty and health" News from Álava 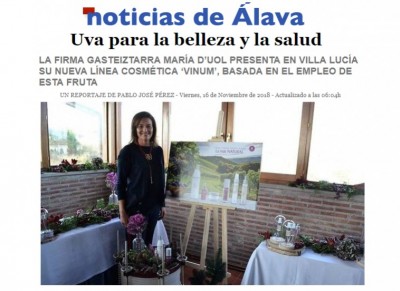 “Grape for beauty and health. THE GASTEIZTARRA MARÍA D'UOL FIRM PRESENTS ITS NEW COSMETIC LINE 'VINUM' AT VILLA LUCÍA, BASED ON THE USE OF THIS FRUIT ” The newspaper Noticias de Álava dedicates a report to María Unceta-Barrenechea Olázar and the new VINUM line by María D ' uol. On November 14, he presented his Most Natural line at the Villa Lucía Wine Thematic Center in Laguardia. The Basque newspaper tells of the formulator “María Unceta-Barrenechea Olázar, pharmacist and director of R + D + I, aware of the good that elements such as grapes could produce, founded 26 years ago María D'uol , a cosmetics laboratory based in Vitoria that uses top quality raw materials, 100% natural. With him, he launched Vinum in 2008, a line consisting of a facial serum and a body firming. It was supported by a scientific study by the CSIC based on the antioxidant power of resveratrol, present in grape skin, much higher than that of other substances used in cosmetics. A decade later, after years of research, María D'uol has improved her own creation and has reformulated her Vinum line with 6 new products that were presented yesterday with the slogan The most natural. " A line of 6 products where UVA is the main protagonist. It also presents its method, the method Repulpa tu piel by María D'uol, improves the density of the skin, its thickness and elasticity.