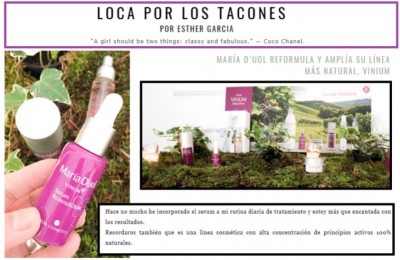 Esther García in her blog " Crazy about heels ", tells us how two months ago she found out about the new VINUM line by María D'uol.

In this new post he describes the new VINUM line by María D'uol . A reformulated line, with 5 new members and based on the antioxidant power of resveratrol. A cosmetic line designed and formulated to redensify and restore the natural volume of the face. With 100% natural active ingredients such as: 1. Vitis Vinífera. The grape as the main protagonist of this line, due to its high content of polyphenols, which are characterized by their high antioxidant power. They neutralize the negative effects of free radicals, responsible for cell aging and, therefore, the appearance of wrinkles. 2. Calanthe Discolor. The orchid. In traditional Chinese medicine it is used to treat wounds and infected skin for its disinfectant and regenerative properties. 3. Sesamum Indicum. Redensifying, it provides volume in areas that have lost their shape. 4. Ruscus and Arnica. They are soothing, astringent and improve redness and even couperose. 5. Hyaluronic Acid. Base of one of the star products of the house , which maintains the hydration of the skin and fills in wrinkles. Esther, tells how the line is made up of 6 products. One of which, the Redensifying Serum has been introduced into her daily treatment routine, with stupendous results. You can read the full post here .